A win – win situation or result is one that is good for everyone whoever are involved. It’s an outcome where everyone comes out happy. A typical win - win situation we all can understand is the work from home concept !! A win – win situation is a concept of finding a middle ground in a conflict or struggle where both the parties are equally satisfied or dissatisfied. A Win – win concept is a belief in the third alternative. It’s not your way or my way but a much better way, a higher way says Stephen Covey. 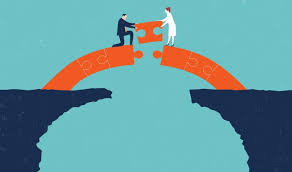 A win – win situation happening at work, in the market place, at home, during negotiations, property quarrels, profit sharing, the list is endless… If we chose to find the middle ground, break the rules to change the equation and make it wrap-up for the parties as more acceptable - it’s a big win – win situation !!

In the Mahabharata, Drona and Drupada were both childhood friends. Drona was the son of a priest and Drupada was the son of a warrior. They both agreed to share everything equally even after growing up. Fortune however favored Drupada as he became king of Panchal but Drona was subjected to abject poverty. Drona, after a lot of deliberation went to see his childhood friend Drupada to seek a share of Drupada’s wealth since this is what they had agreed upon when they were young – to share whatever they had.

Drupada haughtily told his childhood friend Drona that as per law of the kingdom, Drona was not supposed to ask for personal favors from the king. Past is past. The conditions have changed. You can charge me “Dakshina” for services rendered or “Daan” for services not rendered but as charity. Drupada is doing the right thing as a king. He is going by the law. But unfortunately he did it without empathizing his friend’s condition. There was no empathy. He was rude.

Had he made Drona understand, empathized with him, and had given a position things would have been amicable. Power and position changes the attitude of people and Drupada’s actions were not surprising. Drupada hid behind the letter of the law and forgot the spirit !!

A very angry Drona left the palace determined to become Drupada’s equal and this decision leads to a revengeful attitude and turned out to be a huge battle in the Kurukshetra war. Drupada’s daughter is ironically Draupadi who got humiliated in front of everyone.

In Bhagavata, Krishna and Sudama were childhood friends. Sudama was subjected to abject poverty. Krishna welcomed his friend and lavished him with a lot of gifts. So how should leaders behave – like Drupada or Krishna? The answer is to be generous, have empathy but at the same time having a little restraint would do well to reinforce and step up their positions !! That is a win – win situation.

Rajiv worked in an office where his work timings ends at 6 pm. Rajiv wanted to pursue his MBA but the evening classes start by 6 pm, he had to leave by 5 pm. When he approached his boss to explain the situation the boss who is like Drupada would have told him that it’s not possible to leave by 5 pm. Rules are rules and I can’t change them for you. A boss like Krishna would have allowed him to leave by 5 pm. By this several people would have wanted to leave early. A win – win situation would have been to call Rajiv and tell him to compensate the one hour by either working during lunch time or come an hour earlier.

In a village many years ago there lived a hunter and his neighbor was a farmer. They had a fence separating their properties. The farmer had a flock of sheep which he raised it so adoringly. The hunter had some hunting dogs. The dogs one night managed to get into the farmer’s property by making a hole under the fence and caused much damage to the sheep. The farmer went to the hunter’s house the following day and complained to the hunter. The hunter said that he would let his sons fix the issue and promised the farmer that there won’t be a recurrence.

However a few days later a similar incident took place. The dogs had somehow breached the fence and had come to the farmers side and caused damage. The farmer marched to the hunter’s house and reprimanded the hunter about his careless way of handling the dogs. The hunter pleaded guilty but soon after a few days a similar incident took place. The farmer was furious. He took the matter to the local judge who heard the case very patiently. He told the farmer that there is a way to solve this but you have to do exactly do what I say and he said something to the farmer.

The farmer on hearing the judge’s idea was aghast and exclaimed and said, “ But Sir, how can I do this?” The judge said if you want a win – win situation do what I say. I can easily punish the hunter but do you want to live with an enemy next door? The farmer said, “No way !!” So do what I told you said the judge. Accordingly the farmer went home and took 2 of his best lambs and went and knocked on the hunter’s door. “Now what?” asked the hunter? The farmer said you have been a good person; it just so happened that your dog turned out to be a little adventurous, here kindly take the two lambs as a gift for your sons to play with.

The hunter’s sons were so delighted to receive the lambs and took them outside and started playing with them. A few days later the farmer was overjoyed to see that a shed was put up for the dogs to be away from the lambs and they were also leashed. The hunter gave him some of his best kills. He turned out to be a nice neighbor !! The judge was absolutely right, thought the hunter, there is always another way – a much better way. A win – win situation.