(कूपमण्डूक) “Kupamanduka” is a Sanskrit language expression meaning “Frog in the well.” It is a Chinese idiom which refers to a narrow minded person who doesn’t see the larger world around them.

I had done the 3D theater at Swami Vivekananda House in Chennai. The film that was first screened was “Frog in the well.” We watched the motion picture with 3D glasses and that was in the year 2010.

Turtles live in water and are good swimmers because of their webbed feet. Most of them are amphibious. On one of those bright sunny days, a turtle gently ambled from the ocean and meandered along the beach to warm itself up nicely. When it was sauntering across the beach it saw an old abandoned well. The well was dug up for fresh water many years ago but now remained out of use.

A frog lived in that well and considered himself to be the master of that territory. He had come out of the well just to see how things are going on in the other world, when he saw the turtle approaching the well. They both stuck a conversation. The frog looked cool and smugly waved a hello to the turtle. The turtle exclaimed and said, “Nice to see you frog.” Looks like you are very happy !!

The frog pompously replied that he is happy is an under-statement. I am truly enjoying life !! “Look, I am the most knowledgeable frog in the whole well, see what I mean and showed the other frogs and tadpoles; those tadpoles haven’t even started learning about what is life !!” “ Interesting,” said the turtle !!

To show off his big estate in the 4’ diameter well, he invited the turtle to see his well. The turtle took the invitation and when he tried to get into the well, he slipped and fell on the side. The turtle said, “No offences meant, but I find that your well is too small, it’s alright, I can look into the well from here itself.”

The frog got humiliated and almost offended when he asked the turtle, “ What do you mean by Small?” “If this is small, then what is big?” The sea turtle did not know how to express the size of the ocean to the frog who has not seen anything beyond the well. So, the sea turtle gently put across the fact that the ocean is huge and one can’t measure it, leave alone, comparing it. The frog by now was getting confused; he asked the turtle if the ocean was twice or thrice as big as the well. 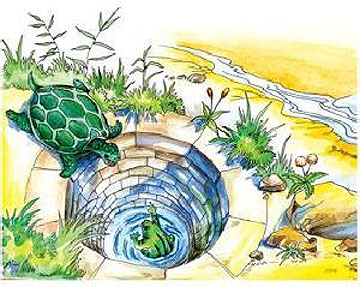 The turtle replied,” the ocean is so huge that once when it rained continuously for ten years the ocean did not increase in size and once when there was a drought for six years the ocean did not decrease in size. The ocean is so huge that floods or drought will not be able to affect it. The frog was aghast after realizing that even after one day of mighty rain, during the previous year the water level in the well rose to its brim !!

It was time to leave. The sea turtle wished the frog well, bid “Good bye” and resumed his journey back and into the ocean leaving the frog baffled and puzzled…

Coming back to where we are in life -- What are you in life? A tadpole, or the frog or the sea turtle? Where is your station in life? In an abandoned well or the limitless ocean?

A tadpole has no idea of whatsoever beyond the structure of the well. It has no vision of the world outside. The frog in the well has come out of the well and stayed close to the well and has seen a little around the well but always in the satisfaction and enjoyment of being in the comfort-zone -- Sailing close to the shore !! 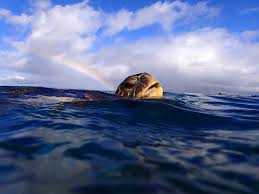 There is a lot of difference between book knowledge and practical knowledge. In Vedanta there are two words used – Gnana, and Vijnana. Gnana or book knowledge is got from books or hear-say and accounts for 98% of your knowledge. This knowledge is a second hand experience. whereas Vijnana accounts for 2% of what you know by your own direct experience. The sea turtle has direct experience of its vastness. For many people there is more than 99.9% Gnana (Second hand knowledge) and less than 0.01% Vijnana (First hand experience) !!

The limited exposure of the frog is similar to those people who have the best qualifications and have zero practical value in everyday life. It makes the person egoistic and thinks of anything as “I know it all attitude.” Limited circle, limited friends, limited band-width, limited good relationships, makes the person a “Limited person !!” Finite when added with finite is always finite, when anything is added to infinite the result is always infinite. It is hard to compare the finite well which has a measurable quantity of water to the ocean which has an immeasurable quantity of water. If you are a frog in a well it’s time to be-friend a turtle since it does not know the great sea !! There is so much to experience in the world outside. Knowledge is something, Experience is something else.