Today some of our friends were talking about Covid 19 and its impact throughout all world countries sweeping across East to West, North to South without any discrimination with respect to race, creed, sex, caste, color, age, rich and the poor. It has uniformly affected everyone and its impact is going to be felt for several years. We were also talking about the disease, the transmission, the recovery, the mortality when one of them jokingly said that in case we all die, we would all meet up in heaven and have coffee together. One of them remarked, “Everyone wants to go to heaven but no one wants to die!!” While dying is scary, heaven is a cool idea, one of them remarked; we slowly started talking about Mythology !!

On the subject of heaven, our talk took us through some Hindu Mythological stories that we spoke of and heaven what comes to our mind is called Swarga. We all know, Swarga or paradise- is where everyone of us want to go after death !! Why do we want to go to Swarga? Because Swarga has a wish fulfilling cow called “Kamadhenu,” you ask for anything and it will give it to you. As if that is not enough there is a tree called “Kalpataru.” Stand under the tree and wish for anything and it would be fulfilled. One more wish fulfiller is available and that is called Chintamani. Chintamani is a jewel, as you keep it in your hand and wish for anything and lo and behold !! You will get it. With so many perks available its little wonder that everyone wants to go there !!

In other words living in Swarga is equivalent to “Infinite returns” with zero investment !! Also, you need not go to work but you will get your salary and bonus !! Swarga is a place where hunger is indulged. All your wants, desires, craving hunger, wish, yearning are all satisfied. In Swarga the king is Indira. He is very powerful, rides an elephant, and is a happy man; but a little insecure !! The reason why he is insecure is because Swarga is always under siege. Asuras are always behind his back. There were always wars happening. In the mythological stories, Indira is said to be drinking, gambling, merry making, basically everything that one shouldn’t do. When an asura is born he runs to his father and asks him to kill the new born. When a rishi performs penance, he engages the Ramba, Oorvasi department to disturb the rishis and spoil their mood.

Indira represents the desires, impulsive nature, and insecurity of the human mind. So, in order to protect his chair as the king, he disturbs the penance of the rishis, Yajna of the rakshasas, and pujas of earthly kings. In spite of having mighty resources in the form of a fulfilling cow Kamadhenu, a Kalpataru tree, and a Chintamani jewel Indira was always insecure. He had everything, yet he is very insecure. Does it sound familiar? Some of you could relate to this;` Having everything but still feeling insecure !!

Moving from Swarga to Kailash - a mountain covered with snow. This is the abode of Lord Shiva where hunger is outgrown. If you see the family picture of Lord Shiva, you can see the Parvathy’s lion sitting near the Shiva’s bullock, the snake, is sitting on Shiva’s head not afraid of the Karthikeya’s Peacock and the mouse under Ganesha is not afraid of the snake. There is no hunger here for hunger is outgrown. 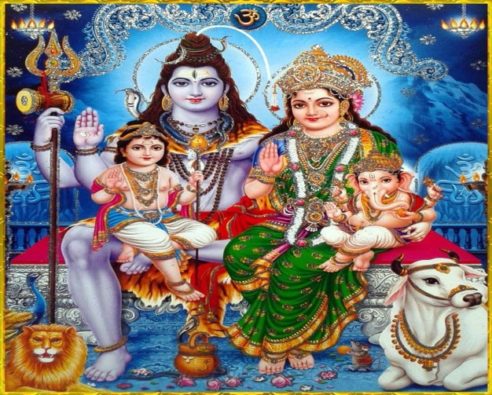 From here we move to Vaikunta, the dwelling place of Lord Vishnu. Vishnu reclines on a five headed serpent. The place is sorrounded by opulence, abundance, affluence – prosperity but accompanied with peace. It is a happy play ground and not a battle field. Vishnu descends, participates with all and engages with everybody at many levels and dons many roles – a lover, a priest, a teacher, a king, a friend and so on and this is what modern business calls it as Avtar !!

We now have three places in heaven – Swarga where hunger is indulged and my hunger matters more; Kailash where hunger is outgrown and Vaikunta where everyone’s hunger is satisfied. To understand what underlies the three places called heaven -- For this we need to understand an animal hunger and human hunger. Human hunger is different from animal hunger in three ways. The first is quantitative. I am not just hungry for today’s food, I am hungry for tomorrow’s food, the day after, for my chidren, for my childrens children and their grand-children, for twenty generations and more…. The hunger is insatiable. It is a bottomless pit. You hoard and hoard and hoard and not give anyone anything to anyone. I will remain poor in order to become rich is the ideology.

Human hunger is qualitative also. Humans are not just hungry for food, besides food they want power, status, properties. Animals have territories and they cannot bequeath them to their off-spring !! We pass on our property to our children and to their children and for many generations to follow. And the third point is since human beings have imagination, they also have empathy. I can be sensitive to your hunger too !! The human beings have the capability to feel the hunger both quantitatively as well as qualitatively.

It’s very clear that for many, your hunger matters only after my hunger is satisfied or after I satisfy my hunger only I will think about your hunger. Even before you pay the employees you pay yourself attitude. That is how most people are; most people are designed like that. In Mythological stories the concept of satisfying your hunger would enable me to outgrow my hunger, therefore you find temples for both Shiva and Vishnu. As a matter of fact they are two sides of the same coin Hari and Hara. By satisfying your hunger helps me to outgrow my hunger – never heard of this concept ?!!

There is not much confusion now. Cynic 1 would say, outgrowing one’s hunger is only for people who wears saffron color robes. Cynic 2 would say If I am going to focus on your hunger first then I am going to be exploited. Cynic 3 would say there is only one underlining reality and that is my hunger. My hunger matters most and first. This is the only reality that have been taught to us and whereas it applies to the human kingdom it is not necessarily applicable in the human kingdom.

Turning all the three possibilities into a Management model, if my hunger comes first and I satisfy it without feeding others then it would be selfish and you would be creating a battlefield. There will be no prosperity, no peace. If you believe that your hunger matters first, and creating a playground with prosperity and peace is difficult. However there is a big possibility in creating prosperity with peace if you focus on other people’s hunger.

Now ask yourself – Whether the high heavens are in Swarga where hunger is indulged or Kailash where there is no hunger or Vaikunta where every one’s hunger is taken care of and your hunger is outgrown. You know where you belong, right?

The Covid 19 pandemic has portrayed the characters of many – This pandemic has hit the entire world and the world is reeling from its onslaught in every possible way. The world is not going to be the way it was in at least the next couple of decades. The nation and the State needs funds. The economically affected people need jobs. The homeless need food. Doctors and Government staff need appreciation and applause. For people who have resources, this is the best time to stand out and be counted. Take care of your hunger but please take into consideration of the jobless, the homeless and help the State and Centre and be the Change you want to see in this World. This would enable to have a heaven on earth and we don’t need to go to heaven to feel this heaven on Earth !!