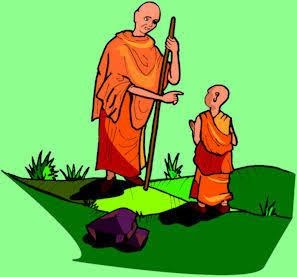 They were to stay in a hut on the way back en-route to the monastery. Due to high velocity winds half the roof of the hut was blown away. The disciple was aghast. He started grumbling and complaining to the Master that after a long time he thought he was going to sleep within a sheltered habitat and now half the roof is open to sky !! The approach of the Master was totally different. He bent on his knees in prayer position, looked up and said, O’ Lord !! Your ways are Your ways; having known that we are coming from the wilderness where we were out in the open, here you have deliberately opened half the roof so that we do not feel suddenly claustrophobic !! Your ways are your ways, my Lord.

The disciple thought that his Master had gone a little crazy and mused that the severe Tapas could have brought about this change of behavior !! No sooner when they both entered the hut and sat down, the sky became overcast with thick clouds that immediately would bring down heavy rain. The disciple complained to the Master, O’ Master look, this definitely is not a spiritual reward to us for having observed such severe austerities, these rains would surely come and the roof is half open !! The disciple lay down on the floor, tossed and turned and could not could not get sleep. He was disturbed and with half his eyes closed he looked at the direction where his Master was and much to his astonishment saw him in prayerful position dancing like a peacock just about to welcome the rains !! Your ways are Your ways , My Lord !!

An hour later time passed. Another streak of lightning followed by a clap of thunder, the rains started pouring, the disciple opened his eyes and seeing that the master was not there inside the hut went out and saw that the Master was happily dancing in the rain, this time more vociferously declaring “O’ Lord, Your ways are Your ways !! When you knew fully well that we both had not taken bath for six months you had in your own beneficent way brought down Celestial showers to clean our bodies !! Your ways are Your ways, O’ Lord.”

The disciple thought that he had, had enough of his Master. He thought that there was just a limit to madness and by far this had exceeded all sorts of it !! He angrily confronted his Master and said, “There is a limit for everything in life and this is the limit !!” Everything is going wrong and you are saying, “Lord, Your ways are Your ways. What is there to be grateful when everything is going wrong? The Master stopped dancing and seeing that His disciple extremely disturbed went near him and said, “ Look here young man, I don’t even know if God exists or not. I don’t even know to whom I am praying and I don’t even know if my prayers would be answered. But My approach to life or feeling grateful for everything in life is keeping me happy in life; so that’s the right approach to life. The proof of Right Living is in the happiness it manifests. You don’t have to ask anybody in the world whether you are living your life right or wrong. You yourself would know. Your approach of complaining for everything in life is making you miserable always. So, that’s the wrong approach to life.

Coming back to us, take a step back to study our own lives and also the inferences we can draw from the story are:

The disciple was having a complaining mind. He was twisting and turning and could not sleep. This is just one example. How many of the people we know of complain about the weather, the roads, the pollution, the traffic, the bosses, the employees, the spouses, the children, the political system and so on… If you are not peaceful in your life not everything is wrong in your life. Anything that is not to your expectation you have developed this habit of complaining. Since we keep complaining, we are not peaceful.

Acknowledging the good that you already have in your life is the foundation for all happiness. Count your blessings and move on…As Buddha said Charaiveti, Charaiveti – Move on, move on…