The word Durga in Hinduism represents external power. The manifestation of Durga could be taken as the Power in Technology, Laws of the land, Designations, Wealth, Property, Gadgets, Place in the organizational hierarchy, Social status are all represented by the word Durga. “Durg” means fortress in Hinduism. Human beings lived in forests and not before very long did not know to protect themselves from predators. With the passage of time, they were able to safeguard themselves from predators by having a fence all around them in the jungle. The fence were with straws initially, then were made with wood and bamboo, then with mud, then with stones and mud, then with stone and cement and bricks. 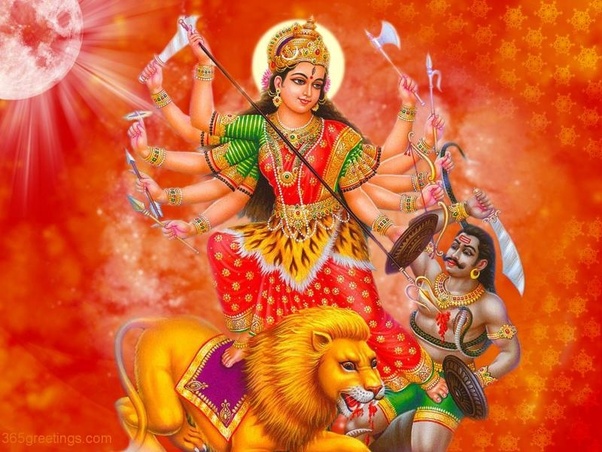 Durga rides a lion which is the king of the jungle, the animal we see is best copied by our leaders who want to be portrayed like a lion. Lions are symbol of strength and courage, royalty, power, aggression and fierceness. Thinking that they are like the lion, leaders try to subjugate and dominate other people using power to subdue, manage and make them harmless and make them follow in order to feel secure. This is the typical quality of the people striving for external power. Looking powerful with external powers like social status, properties to prop up the self-image, and look significant – is the manifestation of Durga’ness. 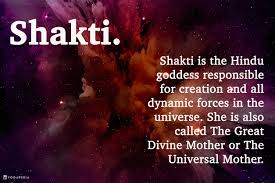 By doing Yajna, a ritual sacrifice, Durga can be given or taken. Shakthi on the other hand cannot be given or taken from outside. Shakthi is got by tapas - austerity, severe discipline. The manifestations of Durga and Shakthi are almost inversely proportional to one another. Too much of Durga would try to compensate for a lack of Shakthi. But if the internal shakthi is evoked in the individual, the Durga component dwindles.

Shakthi is the power that comes from within. It is the innate psychological and physical power that we cannot transmit to others. Shakthi embodies motivation, drive, resilience, patience. But materialists think this alone is not sufficient. We need resources, regulations and skills. So we need Durga.

Modern activists and materialists value Durga over Shakthi while spiritualists and counselors value Shakthi over Durga. The spiritualist and the counselor does not recommend giving power to things around us like friends, relatives, spouses or government instead he gives power over ourselves – the ability to choose and the strength to take responsibility of our own decisions. The anxiety is not there within for those who invoke their Shakthi. The insecurity also is not there. The animal nature is outgrown This differentiation between Shakthi and Durga – Within and Without - helps us understand power - the Indian way.

The objective should be to outgrow the animal nature in us, and enable and empower those around us by our inner SHAKTHI.